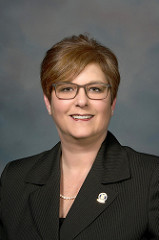 History and Evaluation of the Candidate

As I wrote two years ago in 2015, Maria Schmidt is a dedicated, hard working, yet often overlooked member of City Council; a woman who is a stabilizing presence and a careful legislator not given to controversy.  Literally nothing has changed.   She continues to impress me, and in the spirit of full disclosure she is one of very few who have ever been invited to put a campaign sign up on my lawn.

More than anyone else on council, Mrs. Schmidt stays out of the limelight as much as possible.  In her handling of the office, you will find no advocacy for popular social issues, few, if any remarks later quoted widely in the press, or controversial stands.  That’s not who she is.

I used to wonder why Maria Schmidt is committed so much to council.  What does she hope to gain?  Then I got to know her.

Maria is, besides her role as a politician, the dedicated Band Mom tirelessly volunteering her time and effort at Sterling Heights High School for her children.  She is the volunteer sitting on various boards within the school district, and an employee there as well.  More than anything else, I think, she is about stewardship to the things she finds important, and she devotes all of her energy to these things: her family, her city, and her children’s schools.

With Maria Schmidt, you do not get a lot of flash.  What you get is somebody who is up at 3AM, making sure that the city is on an even keel, that the dozen kids in her charge at band camp are well chaperoned, and that the details get taken care of.  She is an administrator who is not in it for the recognition, but rather for the satisfaction of a job well done.